The race was Saturday night so I really had to plan out my day so I’d be good to go at race time.  I got up early, had breakfast at the hotel, and hot up the expo again for a few hours. After the expo I went to Downtown Disney for lunch. It was fun to walk around, shop and enjoy the beautiful Florida weather. Around 3pm I went back to the hotel to chill and rest up for the race. 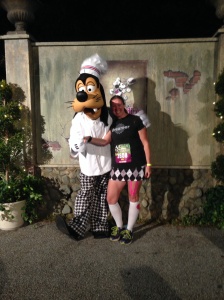 Chef Goofy and I 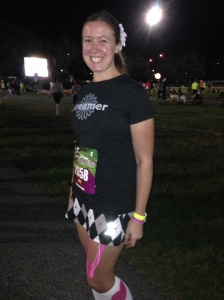 After waiting for a while we headed over to the corals, more time to wait, a 10 pm start means lots of waiting.

Almost to the start!

The race started right on time, I was in coral E, so I didn’t have to wait long to start, the corals were smaller which was great, not as congested at the start.  The first park we ran through was the animal kingdom, we ran 3 really boring miles before we go to the park, the problem with this race is that there are not really any spectators and it’s dark so you can’t really see much.

At the animal kingdom

After animal kingdom was several more boring miles, around mile 9 we headed into Hollywood studios, which was very pretty with the Osborn Family lights, then the boardwalk and finally Epcot.

my friends from Toy Story 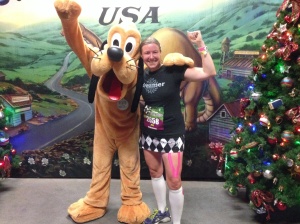 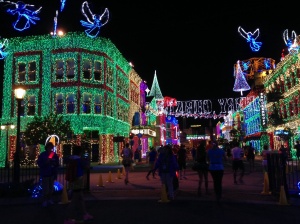 Osborne Family Lights, so so pretty to run through. 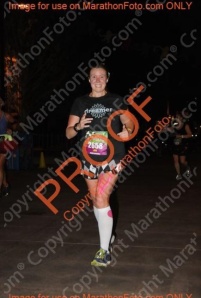 more smiles, this was a fun race! 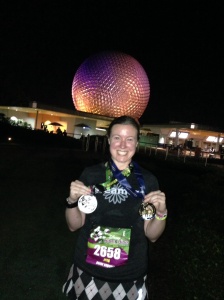 I did it! And I got my coast to coast medal!

It was a pretty fun race, not my fastest or slowest, but still fun!

After the race Epcot was open for eating and drinking.  I almost didn’t go since i finished the race around 1:30am, but I decided I should walk around and get something to eat (you had to pay for food, but they did give us a $10 card we could use)  I also met a few more characters while I was walking around.  I walked into Pinocchio and Gepetto and went to meet Belle and the Beast.  By 3:30am I was back at my hotel and ready for a shower and sleep.

With Belle and the Beast

This entry was posted in Uncategorized and tagged Half marathon, rundisney, Running. Bookmark the permalink.